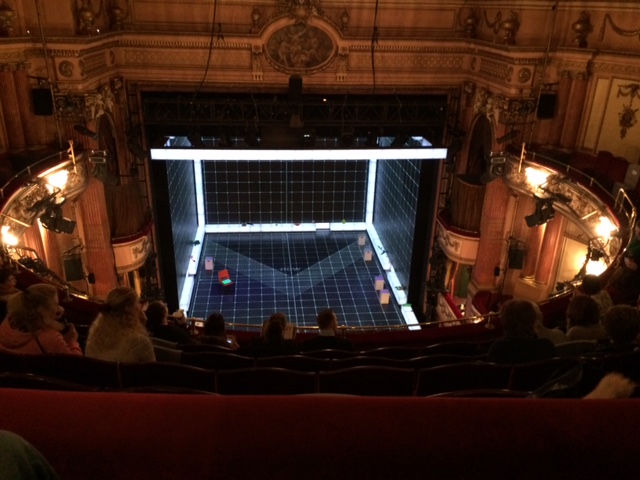 Mark Haddon’s novel The Curious Incident of the Dog in the Night-Time is a best-seller that has made its way onto the current GCSE curriculum and is being taught to students nationwide. The plot is a twist on a murder mystery that follows a child with “Behavioural Problems” towards discovery of who killed his neighbour’s dog. Along this journey, the reader gains an emotional but entertaining insight into how autism affects family life and development.

As the novel packs such a punch, I was sceptical that theatrical adaptation would do it justice. Being able to capture the intimate feeling of first-person narration through a stage performance is a difficult task. Having said this, the production didn’t disappoint as it was innovative and full of surprises. The emotional and personal sense wasn’t lost on the stage as the plot is driven by Christopher’s school teacher reading out his story.

One of my favourite aspects of Simon Stephen’s theatrical adaptation of The Curious Incident of the Dog in the Night-Time was the set that was designed by Bunny Christie. The high-tech backdrop complete with white-noise and sound effects enables the audience to get into the mind of the protagonist Christopher Boone. As Christopher has a natural flair for mathematics, but struggles to feel comfortable in a number of environments, different backdrops are projected onto a mathematical grid. The audience are transported from house to house, through bustling streets and a train station, but their visuals remain filtered through Christopher’s interior world. The change of tempo and surroundings in the show kept it intense and exciting throughout.

Next, Graham Butler’s performance as Christopher has to be commended; he was believable, captivating and compelling. Butler got many laughs in his emphasis of Christopher’s blunt reasoning and the comical elements really helped to break up the more gloomy themes that resonate within the play. Appreciation must be given to his attention to detail in regards Christopher’s quirks, from the twitching, fixated eye-contact and flinching response towards any physical interactions.

Where Christopher was portrayed as warm and endearing within the play, the same cannot be said for the characterisation of his parents. In the novel, Christopher’s parents, especially his father, are represented sympathetically. As an audience member, I found it difficult to connect with the parents as characters because the performance is so centred upon Christopher. It seemed that they were used as tools to drive the plot in the play, rather than acting like fully-formed characters in their own right. The novel is more successful in illuminating the wide-range of people affected by autism, and its negative repercussions on parenting.

Nevertheless, it is difficult to fault Stephen’s theatrical interpretation of Haddon’s The Curious Incident of the Dog in the Night-Time. It is absolutely no surprise that the play as scooped up numerous Olivier and Tony Awards since opening in 2013 and I would highly recommend booking tickets to see it before it closes in October this year.